Welcome to the 'new information' page of the website. Battlefield Tours, France 2018 / 2019 I intend further visits to the The Western Front in the areas of the Somme, Cambrai, Arras. Do you seek a Battlefield Tour with an experienced guide of over fifteen years. Two trips are already set for September and October but not confined to that by any means, please enquire for further information Staying right in the heart of the evocative Somme in a self contained gite sleeps four, two … END_OF_DOCUMENT_TOKEN_TO_BE_REPLACED

Please seek out Burscough 100 the belated promotion of the The War Horse promotion which was then located Booths Store leading up to 11th November 2018 100th Anniversary of the Great War along with the Memorial portrayal in the foyer. Richard Houghton.   . .· Construction work has now started on the new Ringtail  Retail Park and Booths supermarket. Designed to resemble A WW2 hangar with recognition of Royal Naval Air Station Burscough in and out of store this is a unique development … END_OF_DOCUMENT_TOKEN_TO_BE_REPLACED

The undermentioned names are known to be Burscough born servicemen who served King George V1 during the Second World War . If anyone can add information to expand on what is merely name and arm of service we would be truly gratefull.

The some names below have been kindly supplied by Robert Caunce ex Royal Navy, himself of Burscough origin. However should any names have been omitted that is regreted, on behalf of Robert we offer our sincere apologies for any such omissions.  Should any person know of any omissions please forward them for inclusion.

The Caunce Brothers of Burscough.

Also served HMS Duchess which was sunk following collision between The Battleship H.M.S. Barham & HMS Duchess, the story of the tragedy is told below.  Jack was one of only twenty three men to survive the tragedy.

He later served aboard H M S Sheffield and was present at the sinking of the Bismark. The name Sheffield is synonymous with The Royal Navy, indeed that name was a casualty of the Falklands Conflict sunk by an Excocet Missile and was the first ‘major’ casualty of that conflict. Indeed his fortune continued aboard HMS Sheffield please refer to the account below.

In 1941, she participated in the shelling of Genoa (9 February), operations against Vichy convoys and supporting air reinforcements to Malta. In May, Sheffield took part in the sinking of the German battleship Bismarck, narrowly escaping a friendly fire torpedo attack by HMS Ark Royal’s Fairey Swordfish; 11 TSRs dropped (despite having been warned Sheffield was in the vicinity), and only defective Duplex exploders and fine ship handling saved her from disaster.[2] (In the report of the attack, Admiral Sir John Tovey, commanding Home Fleet, was told only no hits were scored on Bismarck.[3] The reaction of Sheffield‘s crew “has not made its way into the official records”.)[4] On 12 June, she located and sunk one of Bismarck’s tankers, the Friedrich Breme. After the destruction of another German supply ship, the Kota Penang in early October (with HMS Kenya), Sheffield returned to Britain. The Cruiser HMS Sheffield above 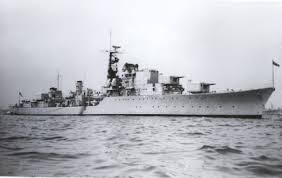 Enlisted  3rd July 1917 aged 17 yrs 11 months, 8th December posted to Border Regt. 3rd April 1918 posted to 1/5th Border (Pioneer)Bn BEF France. His BEF war was cut short as on the 29th April he was wounded by shellfire, evacuated via 52 Fld Ambulance, 29th Casualty Clearing Station back to 29th Gneral Hospital Rouen by 2nd May. There he remained until well enough to be returned to England 28th May to Guildford Military Hospital, Surrey.

23rd July Posted to 3rd ( Depot) Bn Border. Then on 16th August (as the BEF 10 days prior had turned the German advance at the gates of Amiens) he returned to action with 5 / Border in the Somme area. It was in this period of the war known as the last ‘hundred days’ that Walter Arnold and 5/ Border fulfilled the infantry role that they so desperately sought. It was during this period (August / September) that Walter won his Military Medal.

Walter Arnold standing second right (next to man with broom)

In January 1919 the battalion was ‘Army of Occupation’ in Germany being satationeed at Colonge then Bonn, it was whilst satationed here that on 14th May he  was notified of his Military Medal (LG 14th May 1919) On 17th October he signed a short service aggreement to prolonge his army service and was duly posted to 1/Border based at Karachi India, his service number changed to 3590007, this extension of army life came to an end with his discharge 31st May 1921.

Thought for gallantry in action between Late August – September 1918 considered in association with the press cutting above. Note the reference to a ‘German’ Lewis Gun, it was not uncommon for either side to utilise captured weapons, it was well known of the German admiration of ‘Lewis’ as an accurate and no fuss weapon, given that, it is reasonable to assume that Walter Arnold did indeed recapture a British Lewis Gun back from the hands of the enemy.

·On 29th November 1922 he married Mary Jane Dutton of 4 Back Lane ( Now Moss Nook) Burscough Bridge, 26th october following their duaghter Nora Ellen was born. after leaving the army he went into the employ of the Rt Hon Hamilton Smith in Junction Lane, Burscough Bridge before gaining a job at the Royal Army Ordnance Depot & workshops in Burscough. In 1932 he volunteered for the RAOC supplementary reserve extending his engagement in 1936 & 1939 the outcome of this was mobilization on 3rd September 1939 at the Command Ordnance HQ at Childwall, Liverpool.

Sent out with the BEF to France in April 1940 attached to 46th Division. It was with this unit that he served during the German Blitzkreig before being evacuated from Dunkirk after some hairy adventures in getting back to that famous port.  He was back in England (one of the lucky ones) in May 1940. In November 1940 he embarked with 1st Army to Egypt landing on the 29th December 1940, serving with 1st Armoured Brigade.

After action in North Africa his unit was moved to Greece then Crete each being subjected to a German offensive against both islands, luckily he managed to evade the enemy, returning to Egypt arriving 15th May 1941. Serving again with 1st Armoured Brigade.  From there he went to Italy with REME Workshops Stores Section. In October 44  he returned to England to face discharge as ‘aged classified  service group 6’ and discharged. to class Z reserve. Returning to work at the REME Command Workshops Burscough until retirement. In 1965 he was awarded ‘The Imperial Service Medal’ QE11 ‘head’ for his services as a civilian employee in army life.

Walter died 1st September 1979 aged 80 years. The village of Burscough ought to be proud of Walter Arnold as with many of his kind. But here is the story of a remarkable man not many can live for eighty years deduct ‘thirty three’ for youth or retirement then almost all else is ‘soldiering’ or ‘army civilian’ in peace and conflict this man truly served his country.

My gratitude with my sincere thanks to ‘Eric’ for allowing me insight of your ‘Uncle Walter. What is the more remarkable is that Eric himself has no less a life of ‘service’ albeit (Two Monarchs) than Walter. That he speaks of his Uncle in such high regard says much more of the man himself, courage, humility pride from a very unassuming man, Eric  its a please to know you.

His return journey were on the HMT’s Empire Orwell & Empire Windrush via Singapore back to England for demob.